Bevagna : the medieval village where time has stopped

Bevagna was the Roman “Mevania”, on the old via Flaminia. Previously an Umbrian settlement (7th-3rd century B.C.), then an Etruscan town, Bevagna flourished as a Roman Municipium (from 90 B.C.)ruled by the Aemilia family. Present-day Bevagna has preserved its medieval appearance mainly in its western quarters, but its streets still reflect the Roman layout. The town, enclosed by mighty walls, is rich in monuments and historic buildings: its wonderful square, healthy food, famous wines, beautiful scenery and traditional handicrafts make it a relaxing and interesting place. Once the heart of the medieval town, Piazza Filippo Silvestri, which dates back to the 12th-13th centuries, is one of the most harmonious and interesting medieval squares in Italy. The square includes monuments of considerable importance: Palazzo dei Consoli and three churches. Palazzo dei Consoli, an austere square building with a portico on the ground floor, was the seat of the local magistracy in the Middle Ages. Since 1886 it has housed the Francesco Torti Theatre, decorated by Domenico Bruschi and Mariano Piervittori.The church of San Silvestro was completed in 1195 under the direction of master mason Binello. The unfinished fa?ade in travertin and Subasio stone is surmounted by a cornice with zoomorphic protomes and has a finely ornamented portal. The sober and solemn interior has a nave and two aisles separated by solid columns with Corinthian capitals; the nave is roofed with barrel vaulting while the aisles have pointed arches. Above the crypt rises the presbytery supported by two columns. 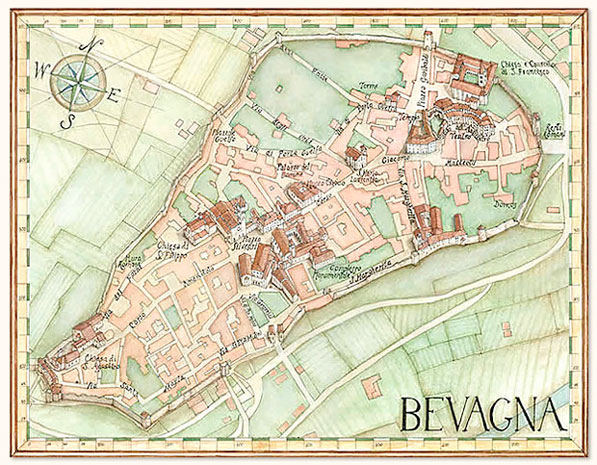 The rich fa?ade of San Michele (late 12th-early 13th centuries) is a fine example of the late Romanesque style. The interior of the church, restored in the 1950s, preserves its Romanesque flavour. The third church in Piazza Filippo Silvestri is the church of Santi Domenico e Giacomo, built in the Middle Ages, it was renovated in the 18th century. It still preserves parts of the original structures and contains a cycle of medieval frescoes. The square also includes a fountain, a typical feature of medieval towns, which has been reconstructed in the 19th century.The church of San Francesco, dating from the late 13th century, stands on the upper part of the town, on the site of a previous Roman temple. The church has a fa?ade with an elegant round-arched portal and marble columns. The interior, which was renovated in the 18th century, contains some interesting works. Beside the church a semicircular block of buildings shows where the Roman theatre was (1st-2nd centuries A.D.). Some traces of it are still visible: the two barrel-vaulted ambulatories which supported the “cavea” (tiers). In the nearby Piazza Garibaldi, which corresponds to the main Roman street in ancient Mevania, you can still see the remains of a Roman temple (2nd century A.D.) and of a thermal building with a beautiful black and white mosaic (2nd century A.D.). Other notable churches are: San Vincenzo (13th century), San Filippo (18th century), Sant\’Agostino (14th century), Chiesa della Consolazione (18th century), Santa Margherita (13th century). Important documents concerning the history of Bevagna are preserved in the Town Hall (renovated in the 18th century); the Archaeological Museum and the picture-gallery contain a small collection of Roman exhibits and some works by local artists.

It’s very easy to get to Bevagna by car.

From Florence (north): motorway A1 till the exit of Valdichiana, then take the highway to Perugia, Assisi, Foligno ( exit Foligno Nord- Bevagna, about 50 minutes from Valdichiana.

From Rome (south): motorway A1 till the exit of Orte, then take the highway to Terni, Spoleto, Foligno (exit Foligno Nord- Bevagna at about 50 minutes from Orte). When you are in Bevagna, drive through Porta Foligno, a gate in the medieval walls, and carry on along themain street for about 150 metres,
L’Orto degli Angeli is on your right.

Bevagna is situated in the centre of Umbria, an ideal position to visit our beautiful region. In less than an hour’s drive you can reach the farthest destinations in the region such as Orvieto, Città di Castello, Gubbio, Norcia, Amelia, Narni, Marmore Waterfall and Lake Trasimeno. In less than 30 minutes you can reach Perugia, Torgiano, Deruta, Assisi and Spoleto. Spello, Foligno, Trevi, Montefalco and Bettona are all in a 10-kilometre radius. Our guests organize their own excursions and visit two or three of these towns every day. If you feel like travelling a bit farther you can easily reach Rome and Siena in about 90 minutes and Florence in about two hours.